Taobao has these Derpy toys up for sale on one of their random shops.  While they are usually a good source for really early toys (The 3rd generation blindbags with colts and Trixie came out early a while back) I’m pretty sure this isn’t real.  This site tends to have lots of random clones/prototypes from people that work in the actual factories over there.

Check out the page for it here!  It’s actually really well done!  Hopefully something like that will be a reality in the future.   It looks like you can buy one if you really want to though! 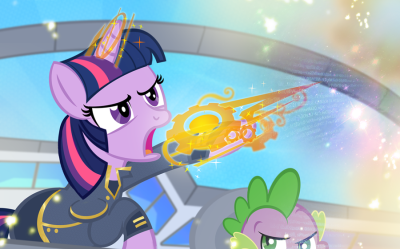 Time for some more expanded synopsis goodness! I'd say the image is kind of fitting, maybe?

Check it out after the break!

Have some story updates to go with your ridiculously short roundup!

Ridiculously early roundup!? That's what happens when it's short! 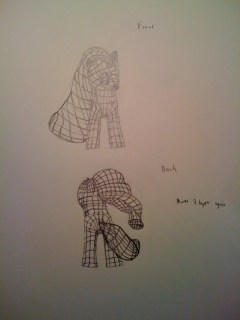 We have had ponies made out of pipecleaners, felt, paper, and pretty much everything else non-lethal you can think of, so why not add another one to the list! This is a wireframe pony contructed by an artist named David Deuchar at Indiana University.  Apparently something like that takes fourty hours of work! I have to admit, I didn’t even know this medium existed outside of the 3D modeling in the virtual world.

Now we need to make a giant one and convert it into a bridge! Wouldn’t that be neat..?

Comments Derped on the other one! You can find the old stuff here.

Simple PMV time! As a reminder, simple does not mean bad. Simple simply means they focus more on a story, or simple scenes as opposed to blinding effects and crazyness.

Check them all out below!

We have genres next to their specific songs, check them all out below.